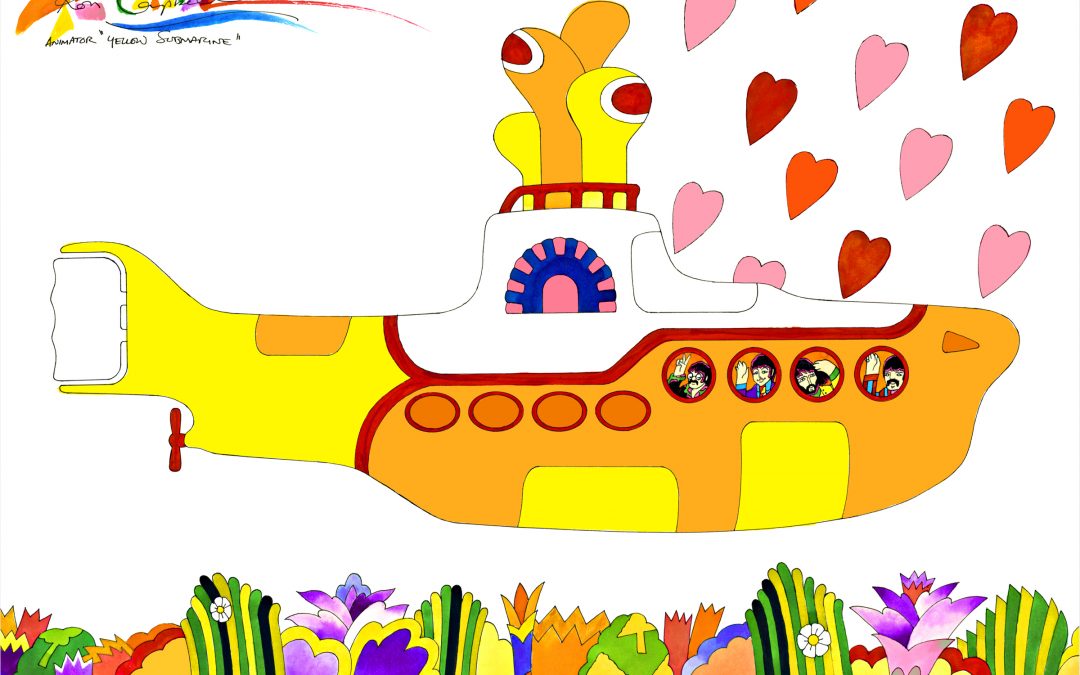 In addition to live painting, the legendary animator and director will be exhibiting his Beatles cartoon art as well as artwork featuring other beloved cartoon characters that encompass his 50 year career, such as Scooby Doo, the Smurfs, Rugrats, Winnie the Pooh, Flintstones, Jetsons, Teenage Mutant Ninja Turtles, and more.

The Modbo and S.P.Q.R. are located in the Arts Alley in downtown Colorado Springs at 17B and 17C E. Bijou.  Street parking is available, but we recommend the lot on Cascade just north of Bijou, which is only a $1 after 3 pm. The Modbo and S.P.Q.R. can be reached at themodbo@gmail.com, themodbo.com, or 633-4240.

About Ron Campbell: Born in 1939 in Seymore, a small town in the Australian state of Victoria, educated at Swinburne Art Institute in Melbourne, Ron Campbell was a force in animation for five decades.

Campbell began his animation career in the late fifties, soon working on Beetle Bailey, Krazy Kat, and Cool McCool, directing the spectacularly successful TV cartoon series The Beatles. The show debuted on 25 September 1965, and remained number one in the ratings for the duration of its four-year run. He later wrote the forward to the book Beatletoons: The Real Story Behind The Cartoon Beatles, where his involvement in the show is also talked about extensively.

He then moved to the United States and Hanna-Barbera, going on to write and produce cartoons for Sesame Street and animate on the original George of the Jungle and Tom Slick TV shows.  His Hollywood studio, Ron Campbell Films, Inc., produced and directed the animation for the Big Blue Marble, which won many awards including a Peabody for Excellence in Broadcasting and an Emmy for Best Children’s Show of the Year.

In the late 60’s Ron Campbell, working with his friend and colleague Duane Crowther (RIP), animated many scenes in the Beatles Yellow Submarine feature film, including the Sea of Time sequence, and much of the action between the Chief Blue Meanie and his boot-licking sidekick, Max.  He animated many scenes involving the multi-named Jeremy Hillary Boob PHD aka the Nowhere Man. In Yellow Submarine Producer Al Brodax’s 2004 memoir Up Periscope Yellow, chronicling the making of Yellow Submarine, Brodax accredits Campbell for essentially helping pull together various elements of the movie.

In the early 1980s, he storyboarded Hanna-Barbera’s hit series, The Smurfs, including the Emmy-award winning “Smurfolympics” special.  Also, during the 70’s and 80’s, Campbell was the line producer and story editor for the hit European children’s show ‘The Smoggies’ and produced, directed, animated, or storyboarded numerous other hit shows of the era, including the Flintstones, Jetsons, Captain Caveman, and Scooby Doo.  Ron was part of the original team the created the Scooby Doo series.

The 1990’s took Ron Campbell to Disney TV Animation where he contracted animation direction and storyboarded on Bonkers, Goof Troop, Darkwing Duck, and Winnie the Pooh.  His studio produced publicity films for Disney.  He also spent much of the decade storyboarding for the Rugrats, Rocket Power, and the bizarre adult cartoon, Duckman.  During that time, he was nominated for an Emmy for a storyboard for Aaahh! Real Monsters, and another for the Rugrats.

Since retiring after a 50 year career, he has been painting subjects always based on the animated cartoons he has helped bring to the screen.  With particular emphasis on The Beatles, he shows his Cartoon Pop Art in galleries internationally and across the USA.