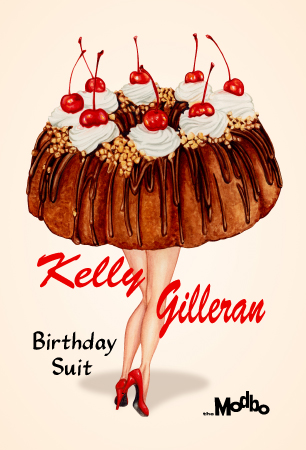 The Modbo presents February’s First Friday: “Birthday Suit” by Kelly Gilleran.  The opening reception is from 5:00 pm until midnight on Friday, February 1st. The show runs through Friday, February 22nd. The Modbo is located in the Arts Alley in downtown Colorado Springs at 17C E. Bijou. Find the stretch of Bijou that is between Cascade and Tejon, and go south down the alley. Street parking is available, but The Modbo recommends the lot on Cascade just north of Bijou, which is only $1 after 3 pm. The Modbo can be reached at themodbo@gmail.com, themodbo.com, or 633-4240.

Kelly Gilleran’s new body of work, “Birthday Suit” focuses on vintage inspired food and pin-ups. She is heavily influenced by mid-century advertising illustrations, and her work seeks to revitalize forgotten imagery with deep reverence for traditional media practice and techniques. Both vibrant and humorous, her work plays with a retro-kitsch aesthetic.

Gilleran is a Colorado Springs painter, focusing on traditional media illustrations adapted digitally for product and surface pattern applications.  Kelly grew up in Connecticut and relocated to Colorado after receiving a BA in Art & Design with a double-concentration in painting and illustration. Gilleran has exhibited her work in Connecticut, Colorado, Massachusetts, California, New York and Melbourne, Australia, and sells online to an international audience through various Print-on-Demand websites. Kelly has recently completed various projects for Save Ferris, Ticklebelly, and Safeway.