Ivory Deville with Della Grazie at The Modbo 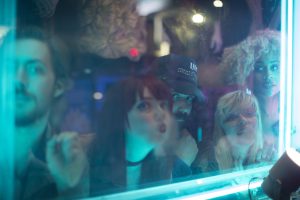 May 31st, join us for a night of music at The Modbo! LA-based band Ivory Deville will be joined by new local project Della Grazie.  Doors at 7:30 pm, show at 8 pm.  $5-7 suggested donation.  The Modbo is located in the Arts Alley in downtown Colorado Springs at 17C E. Bijou.  Street parking is available, but The Modbo recommends the lot on Cascade just north of Bijou, which is only a $1 after 3 pm. The Modbo can be reached at themodbo@gmail.com, themodbo.com, or 633-4240.

Los Angeles band Ivory Deville produces an uncommon swagger and juxtaposition of sound that hits its stride at the intersection of honky tonk, glam rock, and mid-century rock and roll. Born out of the raucous beer joints and restless bones of the Plains, and warmly branded by soaring female harmonies from the California coast, Ivory Deville is an authentic roadhouse band for our time.  Local electronic pop duo Della Grazie is comprised of indie rocker Kellie Palmblad and visual artist Brett Andrus, reformed after a reclusive existential crisis in 2016.  The electronic pop duo replaces rock trio with experimental electronic sounds of decadent dream pop reflecting sultry postmodern disappointment.