Violin for Vasculitis Returns to The Modbo 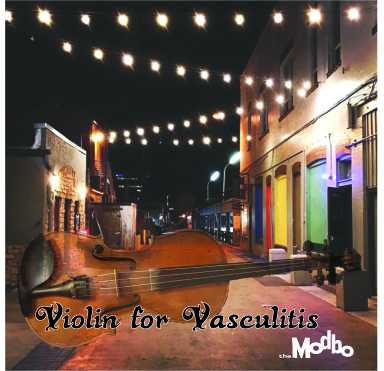 The Modbo presents Violin for Vasculitis, an evening of chamber music and conversation with violinist Allison Lint, pianist Lauren Ciborowski, and oboist Joyce Hanagan on Friday, March 16th, at 7 pm, $7-10 suggested donation.  Violinist and vasculitis patient Allison Lint travels throughout America to educate the public about vasculitis, provide financial support for the Vasculitis Foundation, and connect with patients and caregivers. This short program will feature works by Bruch, Bach, Hindemith, Schubert, and more! This event is open to the public. Proceeds in part benefit the Vasculitis Foundation and the mission of V4V, Inc.  There will be a Q & A to follow the musical portion.

Ohio native Allison Lint currently resides in Kansas, where she serves as adjunct faculty at Fort Hays State University and performs as concertmaster of the Hays Symphony Orchestra. Ms. Lint also runs a private studio out of her home comprising 30 violin, viola, and piano students of all ages. In Fall 2016, she was pleased to begin her first season as a member of the Wichita Symphony Orchestra. Allison is a 2009 graduate of the Oberlin Conservatory of Music. In 2014, she earned her Master of Music at the University of Akron through a rigorous Graduate Teaching Assistantship in Strings. Before completing her graduate degree, Allison won a position in the second violin section of the Akron Symphony Orchestra, where she performed regularly for three seasons. Ms. Lint performs on an 1826 Scottish fiddle, a generous gift from her late grandfather. When not performing or traveling, she spends her time reading economics and history or outdoors exploring the beautiful, open-sky wilderness of her new home state of Kansas.

Joyce Hanagan, Oboe/English Horn, is an active freelance musician in the Pikes Peak Region. She has appeared as a soloist with the Pueblo Symphony, Pueblo Chamber Orchestra and the Alpine Orchestra, and has played with the Colorado Springs Philharmonic, the Fine Arts Center Orchestra, and the Chamber Orchestra of the Springs. Other appearances include St. Andrew’s Recital Series, Classically Alive, 1st Christian Church recitals and numerous church music settings. She maintains an active teaching studio and teaches music education courses at Colorado College. Since 2004, she has directed, coordinated and performed in the St. Andrew’s Recital Series in Manitou Springs.

More about Violin for Vasculitis:

Violin for Vasculitis is the brainchild of Allison Lint, an Ohio native and professional musician. In 2005, at the age of 17, Allison was diagnosed with a rare auto-immune disorder called Granulomatosis with Polyangiitis (GPA or “Wegener’s Granulomatosis” at the time). The illness began with a simple cough and progressed rapidly to a pulmonary hemorrhage and kidney damage which nearly claimed her life.  Today, Allison’s illness is under control, while remaining closely monitored by her rheumatologist at The University of Kansas Vasculitis Clinic, in consultation with the world-class doctors at the Cleveland Clinic. In May 2011, she set off on a journey of personal fulfillment and began her travels to each state in the U.S. to raise awareness of vascular disorders. With nationwide support from members of the Vasculitis Foundation, fellow vasculitis patients, and regional musicians, Allison’s Violin for Vasculitis project has seen 36 events in 23 states.