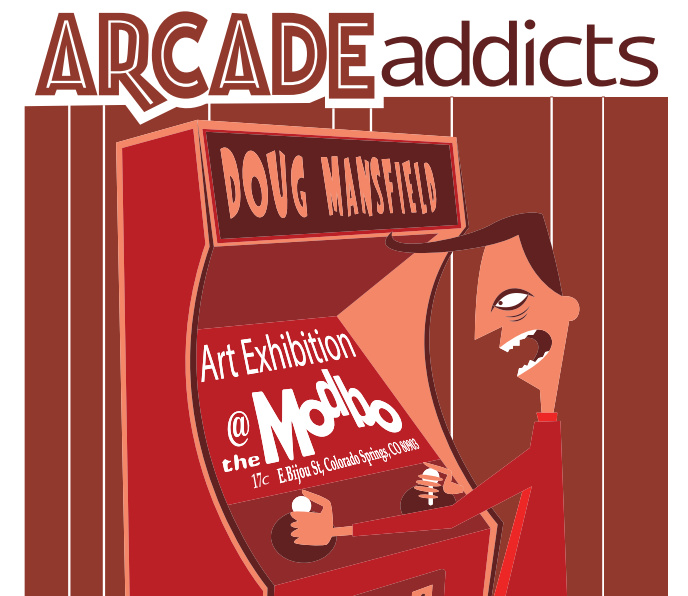 The Modbo presents July’s First Friday on July 7th, 2017 with “Arcade Addicts” by Doug Mansfield– a show of fun, poppy, arcade themed art. First Friday’s reception happens from 5 pm til midnight, and the show remains up through Friday, July 28th. The Modbo is located in the Arts Alley in downtown Colorado Springs at 17C E. Bijou. Street parking is available, but The Modbo recommends the lot on Cascade just north of Bijou, which is only a $1 after 3 pm. The Modbo can be reached at themodbo@gmail.com, themodbo.com, or 633-4240.

“Arcade Addicts” is a nostalgic tour through artist Doug Mansfield’s childhood. Before Atari 2600, which allowed you to play video games at home, you had to go to the arcade game room. Says Mansfield, “I used to get $2.00 allowance each week, and I would spend it all at the Red baron game room that was right behind my house in the Circle East Mall.” Mansfield wanted to capture the fun and excitement that he felt when he played those games– they took him to another world. This show features 14 new original paintings, along with a host of merchandise ranging from 2.25″ buttons to greeting cards, all bearing the images designed by the artist. There will also be swag bags for the early arrivers.

Doug Mansfield is an artist, illustrator and musician working and living in Colorado Springs. Doug has played in bands and created art since the late 1980’s but most notably known for being the guitar player and songwriter for the underground Punk Rock band The Mansfields. Since 1998 The Mansfields have been writing, recording, and touring creating a brand of music that they live and love. Underground Punk Rock, Cartoons, Lowbrow, Hot Rods, Rockabilly, Tattoos, & Monsters have been the inspiration for Doug’s art and music. “I just want to create some cool art that inspires people. This is a lifestyle that I love to create and exist in,” says Mansfield. Doug works mostly with acrylic paint on panel but also likes illustration and photography.