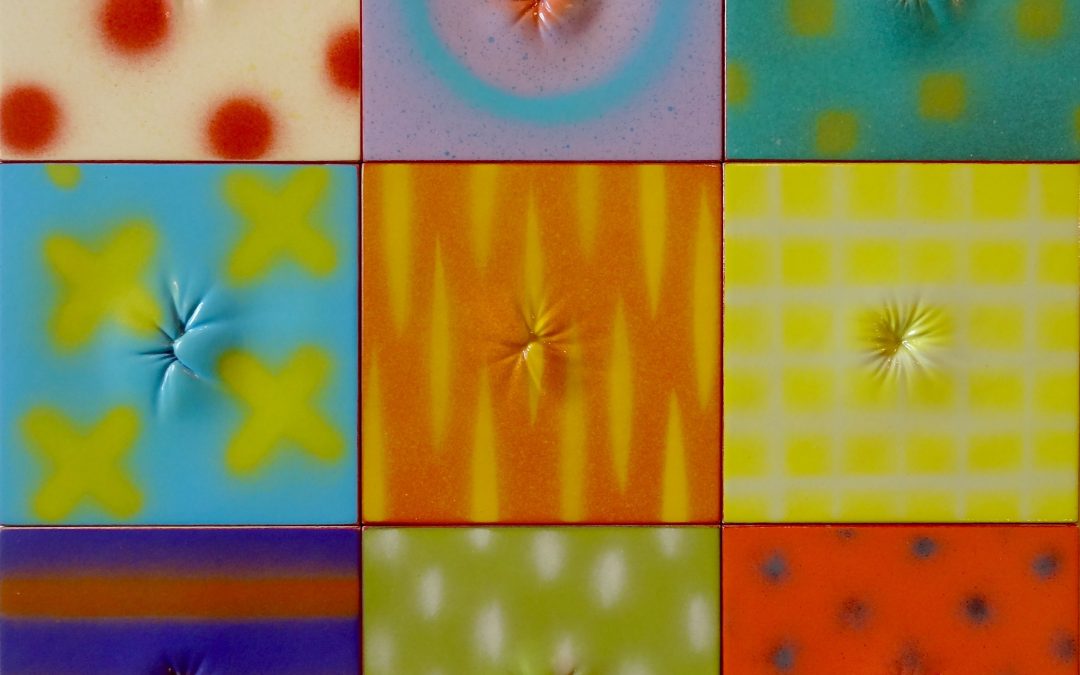 The Modbo presents August’s First Friday on August 4th, 2017 with “O’Meallie,” a show of new work by Sean O’Meallie that manages to be both beautiful and humorous.  First Friday’s reception happens from 5 pm til midnight, and the show remains up through Friday, August 25th.  There will be sporadic and roving sound improvisation by Joseph Dugan. There will be a free artist’s talk on Friday, August 25th, at 5:30 pm.

The Modbo is located in the Arts Alley in downtown Colorado Springs at 17C E. Bijou. Street parking is available, but The Modbo recommends the lot on Cascade just north of Bijou, which is only a $1 after 3 pm. The Modbo can be reached at themodbo@gmail.com, themodbo.com, or 633-4240.

Quoth Sean O’Meallie: “This show is about relevant cultural issues and color and form.”

Artist Statement – I spent ten years inventing toy concepts for the international market. Many of the things I observed as an object conceptualist appealing to pre-linguistic children and wary parents are now part of my art making, such as involuntary modes of visual perception and the likelihood of a viewer’s cultural predisposition. I play with these things, usually in recombinant and disruptive ways with the goal of rearranging the furniture in one’s head in new, surprising ways. It’s fun to puzzle out and keeps me busy.  My work is usually painted wood. The wood mostly holds up the paint and takes up space in the room. Wood’s a wonderful medium; familiar, touchable, renewable. I imagine it could be anything behind the paint doing the job though, like dirt or cheese. –Sean O’Meallie

Bio – Sean O’Meallie has a background in higher education and toy invention, but is known for creating eye-catching thought provoking painted wood sculptures. His sculptures are held in numerous public, private and museum collections, and have been toured in the U.S. and Europe. His work is included in Launching the Imagination, a university teaching text on art and design. Cowboy Pajamas, a 20’ painted bronze sculpture of an abstracted cowboy with his guns drawn is located in downtown Denver, and he is the creator of The Manitou Chair Project, a social artwork completed in Manitou Springs, Colorado in 2011 using only the town’s possessions for a four hour, 1/2 mile long installation down its historic main street. Additional public commissions include Balloon Man Running, a 32’ tall permanent sculpture of a running balloon figure for the RTD Central Park Station in Denver, CO., which was named Best New Public Artwork of 2017 by Denver’s Westword newspaper.

O’Meallie’s work has won numerous awards and recognitions. The Manitou Chair Project was named as the Best Temporary Artwork in the state in 2011. In 2015, Poly Poly, a temporary outdoor installation of inflated vinyl toy parrots in downtown Colorado Springs was awarded the top prize in the Art On The Streets competition and was recognized nationally by Americans For The Arts for inclusion in the 2015 Public Art Network (PAN) citing it’s originality and affective social engagement. O’Meallie was born and raised in New Orleans and attended the University of New Orleans from 1973-1977 studying under Howard Jones, Tom Young, George Rowan and Doyle Gertjejansen. He was studio assistant for noted New Orleans artist Ida Kohlmeyer before relocating to Colorado.  In the 1980’s and 90’s, working out of New York and Colorado Springs, O’Meallie invented toy concepts for the international marketplace. During this time he also taught studio art at the University of Colorado in Colorado Springs.