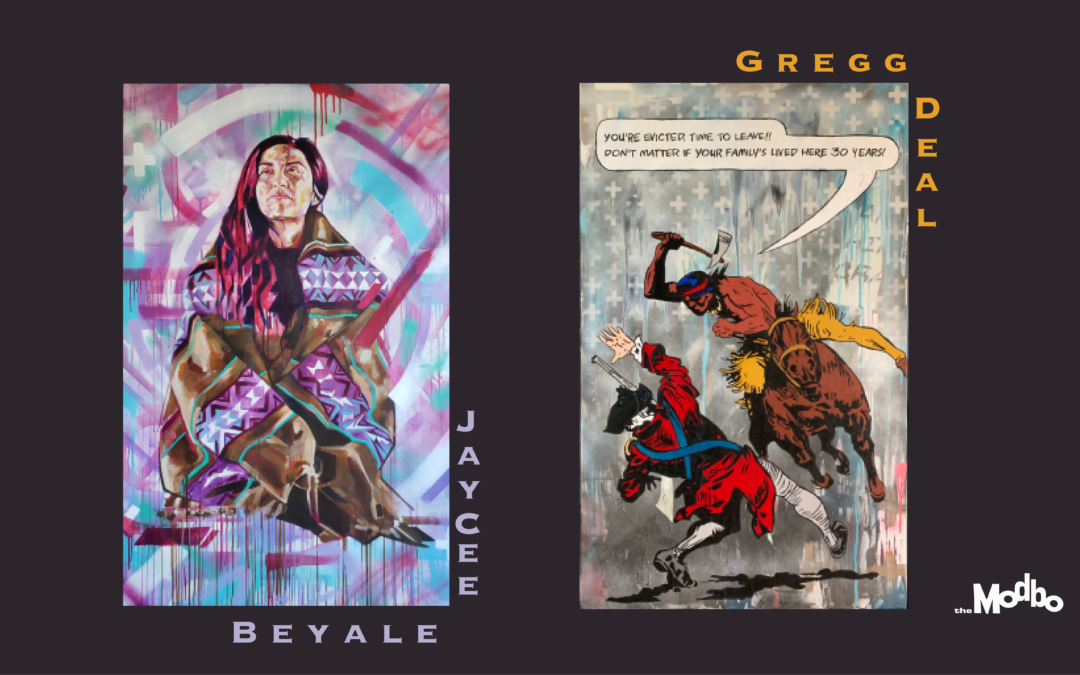 The Modbo is excited to present a short and modified First Friday experience for August: Modern Storytellers by JayCee Beyale and Gregg Deal.  The opening reception is from 5 pm until 8 pm on Friday, August 7th.  During opening hours, guests must wear masks inside the space, and will only be allowed in a few people at a time.  The show runs through Friday, August 28th. In addition to the opening reception, the gallery is open by appointment or via personalized FaceTime tour.  The Modbo is located in the Arts Alley in downtown Colorado Springs at 17C E. Bijou. Find the stretch of Bijou that is between Cascade and Tejon, and go south down the alley. Street parking is available, but The Modbo recommends the lot on Cascade just north of Bijou, which is only $1 after 3 pm. The Modbo can be reached at themodbo@gmail.com, themodbo.com, or 633-4240.

JayCee Beyale grew up in the Four Corners area of New Mexico, and received his BFA in printmaking from the University of New Mexico.  He currently manages a screen printing and embroidery shop in Colorado Springs and often participates in collaborative murals and other art projects with fellow organizations and artists.  JayCee’s connection to his aboriginal culture is heavily influenced by his involvement in the arts; his personal identity and background have always been present in his work because he is proud of who he is and where he comes from.  His career as an artist started when he discovered street art and graffiti. He is deeply influenced by music, and is certain that without music, his art would not exist.  Combining traditional indigenous ideologies and his personal Buddhist practice, JayCee is always striving to emphasize the concepts and convictions in his art.  Using a combination of spray paints and acrylics, he hopes to share his beliefs by celebrating the fusion of technology and Indigenous culture in his work. JayCee aspires to illustrate the Laws of Movement, Unity and Impermanence in his work.

Gregg Deal (Pyramid Lake Paiute Tribe) is a provocative contemporary artist who challenges Western perceptions of Indigenous people, touching on issues of race, history and stereotypes. Through his work—paintings, murals, performance art, filmmaking and spoken word—Deal critically examines issues and tells stories of decolonization and appropriation that affect Indian country. Deal’s activism exists in his art, as well as his participation in political movements