The Mussorgsky Project: Pictures at an Exhibition Reimagined 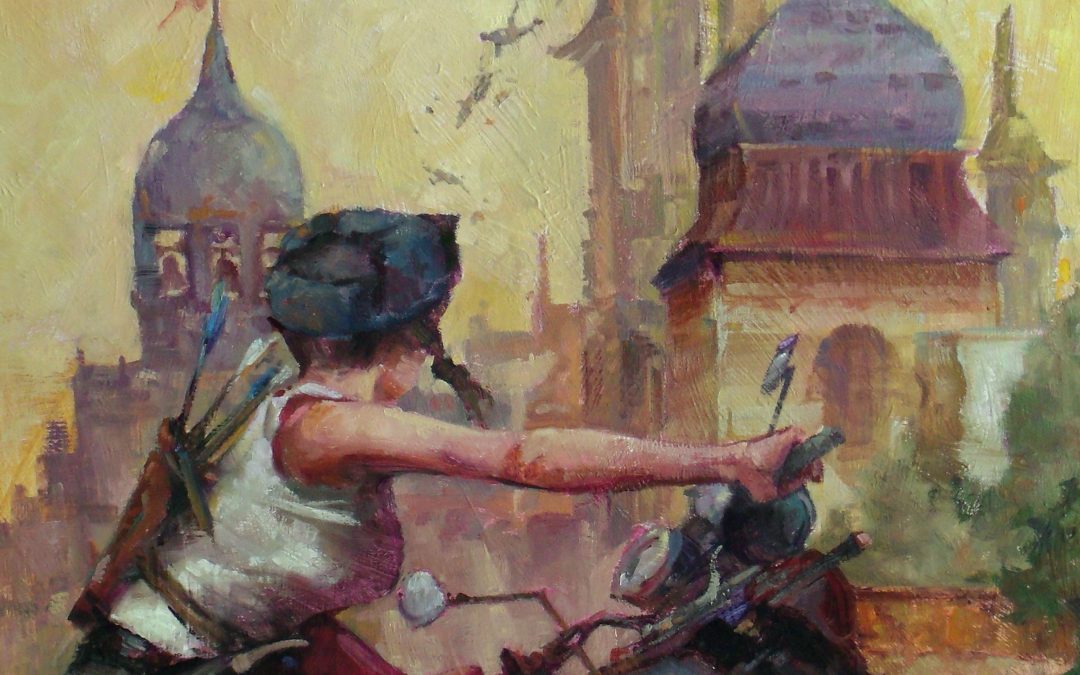 The Modbo presents October’s First Friday: The Mussorgsky Project: Pictures at an Exhibition Reimagined, with art by Phil Lear and musical collaborations throughout the month.  The opening reception is from 5:00 pm until midnight on Friday, October 5th. The show runs through Friday, October 26th. There will be live musical collaborations on First Friday, Friday the 19th, and Friday the 26th.  The Modbo is located in the Arts Alley in downtown Colorado Springs at 17C E. Bijou. Find the stretch of Bijou that is between Cascade and Tejon, and go south down the alley. Street parking is available, but The Modbo recommends the lot on Cascade just north of Bijou, which is only $1 after 3 pm. The Modbo can be reached at themodbo@gmail.com, themodbo.com, or 633-4240.

Russian composer Modest Mussorgsky wrote his famous piece, “Pictures at an Exhibition,” in 1874.  An artist friend named Viktor Hartmann had just died suddenly, and plunged into despair, Mussorgsky and other friends of Hartmann staged a memorial exhibition of hundreds of Hartmann’s works.  This became the inspiration for Mussorgky’s composition. The much beloved classical piece was originally written for solo piano, but quickly after its premiere was orchestrated by Maurice Ravel, and then rearranged for other instruments in countless versions over the years.

For such a well known piece, gallerist and classical pianist Lauren Ciborowski has always found it to be a bit odd that the works by Hartmann which inspired it are… not terribly interesting.  In her opinion. Says Ciborowski, “They aren’t bad, per se, but nothing about them seems awe-inspiring enough to have sparked such creative genius in Mussorgsky.” It is out of that musing that Ciborowski decided to embark on a pet project that she’s always wanted to do– showing an exhibit of art more worthy of Pictures at an Exhibition.  She sought out acclaimed local painter Phil Lear, and he agreed to take on this unusual project.

Says Lear, “It’s always exciting to see one branch of the arts inspire another. A painting inspires a piece of music which, with this project, inspires another painting. For me what’s great about “Pictures” is the new character of each movement. It’s like a collection of short stories.

Creating work for this project obviously has involved listening to the same music over and over. I’ve tried to avoid any connection to the original paintings that the composer drew from, and been moved simply by the emotion and visual imagery I get from Modest’s pieces. In particular I’ll replay different versions of, say, “The Gnome” until I get a concrete vision of what sort of scene I see this music accompanying.  Sometimes it’s felt like putting a score to a Looney Tunes adventure. The movements are so varied – theatrical, serene, sometimes almost menacing – that it hasn’t been difficult to explore a different mood in each piece for this project. Throughout I’ve tried to keep a similar playfulness to the work, and attempted to give it all a feeling of old Russia to acknowledge its origins.”

To incorporate the musical element of this collaboration, Ciborowski has programmed three nights of music.  On First Friday, October 5th, between 5 and midnight you will hear classical performances by Jeremy Van Hoy accompanied by Lauren Ciborowski, Solveig Olsen (who will premier a new vocal arrangement written by Mark Arnest with Lyrics by Nico Wilkinson), The First Congregational Church handbell choir, led by Mandy Todd, and The Catamount Quintet.  The second evening of music will be on Friday, October 19th, at 7 pm, $7-$10 suggested donation. This night will feature local musicians My name is Harriett, Charlie Milo, Jeremy Facknitz, Solveig Olsen reprising the piece from First Friday, Allison Lint, and Swelter and Burn. There will be some classical performances in this evening, but mostly, you’ll have the unique opportunity to hear local players riffing on Mussorgsky in their own style.  Plus, special guest Max Ferguson will add a bit of dramatic flair to the evening. Finally, on Friday, October 26th, 7 pm, $7-$10 suggested donation, join us for a night of modern jazz with Denver musicians Paul Riola, Joshua Trinidad, Kim Stone, Ian Argys, and Michel Stahli. This performance will be livestreamed on Jazz 93.5.

Phil Lear has been painting professionally in the Front Range area for over a decade. He has won awards for his plein air work, and gained considerable recognition for his renderings of intriguing figurative scenes. Whether painting landscapes or narratives, he approaches his work as a story-teller.

Following an illustration-focused degree in commercial art, Phil traveled and took on various projects that nurtured his creative skills, before settling in Colorado Springs. He is honored to have his work in many private collections, as well as on view to the public through a number of business commissions.